Hi I’m Jack and I would like to share my experience of using my Robox, with regard to a component I designed and am now selling online. The guys and CEL were happy to hear my story and suggested I write a blog. Below is a short story of how I came up with the idea and what I did with it:

I first had the thought of the product when I was a passenger in a brand new Ford Fiesta, having a brainstorm of what things around the cabin I could 3d print. I knew that the vehicle was the U.K’s most sold car, and so there could be real demand If I came up with something significant. I initially focussed on a phone adaptor, located near the handbrake, but soon after noticed this very large gaping hole, situated just behind the handbrake lever. Essentially the plastic handbrake had a flange at the back, instead of a leather gaiter, which in the downwards position covered an opening. However in the upwards position this flange lowered into the car, leaving a ~5x3cm opening. This opening was situated approximately just down from the driving occupants top left hip, meaning if an item, such as car keys fell out of the persons pocket then it would fall down into this hole. Recovering items that were lost could not be done at short notice, requiring the centre console to be partly removed using specific tools, to gain access to the lower regions of the car. Imagine losing your car keys, what would you do!

At that point I had my Eureka moment! I could design a cover to stop this from happening. The next step was to confirm no one else had thought of the solution by having a look on the internet, using the car club forums. I came across a page, containing circa 100+ comments from people having lost valuables. Items from keys to lighters had been said to have been lost, causing real aggravation to customers. The section of the website had been viewed over 12,000 times, so at that point I knew there was demand for a solution.

Around work commitments I developed a concept over a 7 month time frame, using friends to trial my designs. I think to date I produced around 30 prototype designs, all designed on my home computer using a professional level cad program. This is where I really got to know my Robox and appreciate its capability. I opted for a third party filament, based on comments from the Robox community, choosing Colourfabb XT black and was impressed how easy it was to optimise through the Automaker software. I spent a long time making tweaks before coming up with a specific architecture, just optimising it around the printer, such as print time and material costs. Finally after some additional trialling I finalised my design and had a product ready for launch! 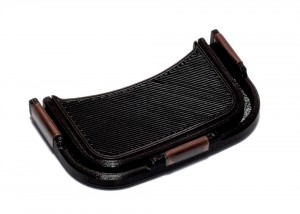 Though initially intending to sell the product on eBay I opted to create my own website. After coming up with a suitable name; strongshapes, FYI my surname is Strong, I set about creating a website that had a professional image to potential customers and also support them after purchasing. I’m really happy with the results and am continually developing it further. The website went live in July and I am happy to report it is a success, people are actually buying my product! I am currently looking at ways of advertising as I find sales are relative to social media. Ultimately though I think when I make the costs back from purchasing the printer I will have reached a personal milestone. I don’t think it will be too long and additionally I have a local university offering to 3d print my design, moving up from prototyping, all possible thanks to my Robox!

Finally just to say that if you know anyone who has a Ford Fiesta 2012+ to have a look at my website and see if they could use this product. Also If at least I could ask readers who are on social media to share my website, and help support this Robox enthusiast!

About the Author: Jack