There is a joke around about how engineers operate under the idea that “If it isn’t broken, it doesn’t have enough features or do enough.” Humorous as that is, it sometimes comes close to the truth. In the pursuit of making it better, I have started a project that, like many of my projects, is targeted toward making something better for someone else.

My girlfriend uses a cheap, battery powered alarm clock that with a rather potent buzzer. She buys them for about six dollars each and they last about a year. I asked her one day why she didn’t get a nicer one and she gave me a couple of reasons, among them that the alarm clock she really wanted was an expensive unit that used a chime bar instead of the buzzer. These units sell for about a hundred dollars and consist of a bamboo box with the chime bar, a small striker, and a flip-up lid with the clock display. I looked at one of them in the store for about five minutes and was not impressed with the build quality or the value for the money. The clock didn’t even seem to be backlit. Based on her requirements and my own desire to do something creative, I started the design for my own version of the chime alarm clock.

The design centers around an aluminum bar chime tuned to A# or about 1121 MHz. I used an app on my smartphone to do the tuning so it isn’t exact. The bar is suspended on woven aramid fiber strings so that I can tighten it very tightly and so that they don’t stretch significantly over time. An aluminum frame will support the mounting strings and provides the strength needed to keep the strings tight. The outer housing will be made of hardwood, probably a combination of different colors and grains to give the finished unit character. Right now I am thinking about maple for the sides and walnut or mahogany for the end caps. One of the parts that I disliked about the commercial version is that the chime sits inside the box and is somewhat muted by the box. To better expose the chime, the aluminum frame will slide upward out of the wooden housing when the user does some action to open the clock.

A large backlit 2-line LCD will be framed into the front of the wooden housing and will display time, day of the week, date, and alarm status. The housing will conceal and mount the Ardiuno Nano and time chip that will run the clock and the battery pack that will provide power. The chime is activated with a pull-type solenoid mounted to the aluminum frame. The solenoid pulls a lever to which a striker is mounted. The striker impact on the bar causes the bar to chime and a spring retracts the solenoid and striker bar. I started thinking about the whole arrangement of the solenoid and striker bar with the idea that making the striker movable along the striker arm would enable a rudimentary volume control. 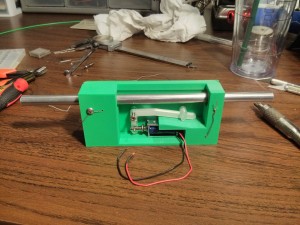 Test setup for the alarm clock

To test this idea, I used the Robox to fabricate a frame, the striker, and the striker bar. The frame was made from ABS, printed on the default fine settings. It turned out pretty well, though it did require some deburring. I printed it to allow the solenoid to be pressed into the housing with a little force to keep from having to secure the solenoid with a fastener. The chime bar and striker were printed with Taulman T-Glase PETT. This material has become my new favorite for printing on the Robox because it is strong, durable, doesn’t break, and prints rather easily. It also seems to give better surface finish results than ABS and it doesn’t smell nasty. Since the striker would be a forced fit onto the striker bar, I wanted the flexibility of the T-Glase for the striker. I ended up needing to print four strikers since it has an overhang and the first one fused to the support material too well. Two of the replacement parts also had issues but the fourth turned out ok. I drilled a couple holes for the aramid string and an anchor screw and assembled everything. Tapping the chime bar with a hex key yields a clear note at about A# and flicking the solenoid plunger with a finger results in a slightly flatter tone, mostly due to the dwell time of the striker against the chime bar. The Arduino controlled motion showed significantly better performance and, other than some clacking from plastic parts, performed very well: (AlarmClockVideo) The test of the volume concept showed that there was a volume change by moving the striker closer to the striker bar pivot point but that it wasn’t really significant. I am going to look into adjusting the position of the solenoid to see if that will help adjust the volume.

The next step with this project will be to tune the chime bar to the exact note she wants using the test frame. Since the chime bar is supported on the aramid strings, I am not foreseeing a difference in tone between the ABS mount and the final aluminum mount. I am considering replacing the PETT striker with an aluminum or acetal resin striker just to give a little clearer note.

The Robox will most likely be used to prototype the remainder of the frame parts and the extension/retraction mechanism to make sure they work as intended. One of the reasons I bought a 3D printer is to be able to test these complex mechanisms before I spend the time and money making the final parts. I like to work with hardwood, the exotic varieties of which can be rather expensive. This project will likely be the first one to use the 3D printer heavily and I foresee several iterations to get everything set in the housing so I have room for the batteries, all the electronics, and the chime frame. 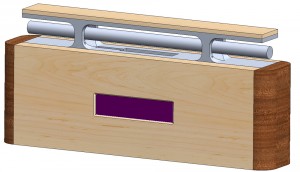 A few more details I plan to add on the alarm clock will, I hope, blur the line between form and function to make the final result a balance of both. These include a programmable display color, adjustable backlight brightness (a requirement from my girlfriend), capacitive sensors for the sleep bar and possibly for the control panel. Silver and contrasting hardwood inlays  will add a decorative touch and will give visual indications of the control locations.  I chose Arduino for the brains because of the price and flexibility of the platform. With a little programming and a few parts, I will be able to give this alarm clock functionality that the cheap alarm clocks don’t have, including multiple alarms, alarms by day, different display brightness depending on the day, or with an added light sensor, on ambient light. A battery status is easy to add and will minimize the chance of getting caught with a low battery when it is inconvenient.

This is the design state after a year of off-and-on work. Hopefully with the Robox I will be able to run the prototypes of the frames and get things moving a little faster. Maybe in time for Christmas this year.

Ben Hudson is a designer and engineer running his own business in the Southwest US state Arizona. Ben runs several Robox units as a prototyping service and was involved in early Robox beta testing.