But when it comes to 3D printers’ size really isn’t everything.

There are now two common selling points for those wanting to flog 3D printers – size / build volume and layer height.

And customers tend to assume they want the biggest unit possible, but want to print with the smallest layers possible, so let’s address these points below.

Build volume – The bigger the better?

After a pleasurable chat with one of our like-minded customers earlier this week we agreed on a number of misnomers, and they phrased one of them very concisely; “When shopping for a 3D printer customers often look for a spec. that will actually only fulfil 2% of their requirements, not the 98%”

I found this statement to ring very true, and build volume is a great example. Customers might occasionally want to print a large object that really does require a huge build volume, but 98% of the time the part they are printing will fit on a normal bed.

If you walk around the house and think of all the things you would probably want to print with your 3D printer – such as coat hooks, key fobs, door handles, light pulls, shelving brackets etc – you could probably fit each object in the palm of your hand, in which case, why do you need a build platform which is any bigger?

And yet still the natural first thought is to shop for a beast of a machine that is more expensive, ugly and domineering. Chances are the machine won’t fit on the desk, in the home or even at work, and 98% of the time won’t be used to it full advantage because there’s no need for such a huge space to print.

I’m not criticising as I’ve done it myself. After building my first 3D printer the next thing I did was build a much bigger one. And guess what? The big printer ended up printing parts that would have fitted on the first machine but just took longer to do and occupied more space in the office.

So to conclude, everyone might think they want a big one, they actually probably only need a small one! 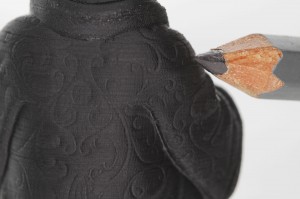 Layer height – The smaller the better?

Marketing numbers, the driving force for many product design briefs, are used to sell printers and grab the customers’ attention, and we are as guilty of this as the next 3D printing specialist. We quote a minimum layer height of 20microns and we are not lying!

In contrast to build volume, in the case of microns, the common misconception is that the smaller the micron the better.

But would you ever want to print using a 20micron layer height? Maybe, but it’s not the first thing to consider when starting a FFF print job.

The obvious payoff is time, if you have a few days to spare and don’t need the printer for other jobs you can get amazing results by opting for a 20micron print. But whereas it will take double the time to produce a 20micron print over a 40, the quality won’t be twice as good.

In fact, below 50microns the improvements in quality are difficult to justify and I don’t know anyone who has enough time on their hands to be patient and wait to see the results.

Tying up your printer for hours on end is not the only sacrifice with low layer heights. Design and testing is an interactive process; print three or four items in the time it takes to do one and you will find that everyone you print is tweaked from the last and you end up with a better designed part over the same period of time – this is one of the real advantages with a desktop 3D printer.

When selecting a 3D printer I would look for range as well as minimum layer height. ‘Draft’ is more often used than ‘fine’ in our office when selecting a print profile and starting a print; we might print a part five times before we are happy with the design and only the last time do we select ‘fine’ quality. Because of the twin nozzle system the Robox can print from 20 – 700micron layers, which we believe is an industry best (small boast there!)

In summary 3D printing is about gaining the ability to manufacture parts to your requirements on your desktop.

Most people don’t yet have this ability and it’s what 3D printing can do for you. Think about what you’re really going to make and where you would like to use your printer and select a product that fits that brief. For 99% of people, including me, ease of use, reliability and having something close to hand are the top 3 requirements, while print quality, features, future proof design and compactness follow closely behind.

We design products that we want personally, of course we have to sell them and play the same game as every other retailer or design house, but most of our design briefs are driven by personal desire. As with everyone we like to think that our requirements are not uncommon and so far feedback seems to support this.

About the Author: Chris Elsworthy

Chris Elsworthy is CEL MD and Lead Mechanical Engineer. Chris is passionate about engineering and creates efficient and innovative designs at every opportunity. He is happiest when surrounded by objects with function and purpose and often says “you don’t really own it until you have taken it apart.”