3D printing has become a critical tool in product development and the increased availability of high-strength, dependable materials has enabled the use of 3D printing in areas that have not previously been possible. The open-minded thinking of the maker community has helped drive this advancement. Companies like Taulman and ColorFabb have made materials readily available for any fused filament fabrication (FFF) 3D printer that have strength, durability, and stiffness far above the basic PLA and ABS materials commonly used. One of these new materials is PET, a polyester based thermoplastic commonly used in water bottles for its chemical stability, strength, and durability. Taulman released T-Glase, a PETT variation of the basic material, and ColorFabb followed with XT, using a proprietary Eastman-Kodak formulation called Amphora. Both materials offer better strength and rigidity than PLA, hydrophobic properties, and ease of printing. I started using T-Glase to get away from ABS due to the fumes and the curling and warping that occurred in many of my prints, rendering some of them completely unusable. I added XT because of the opaque colors and found that it is the easiest printing material in my inventory.
Several months ago I was contracted to help a local company solve a problem with one of their products. They needed to release a latch to open a spring-loaded drawer. It seems like a simple problem on the surface, but they also needed the system to run on a 3VDC battery with very low current draw. The solution they were using was a solenoid and due to the low voltage and current draw the solenoid did not generate enough mechanical force to overcome the friction between the latch and its mating catch. Compounding the problem was the available volume; the entire device is about the size of a smartphone and is abou5/8 of an inch thick. The area reserved for the mechanism, battery, and controller board is about 2.5 inches long and an inch wide. The battery and controller took up close to 2/3rds of that space, leaving only about an inch by inch by half-inch volume to work with. My initial solution was to use a miniature gear motor purchased from Pololu for a robotics project. This was coupled with a steel leaf spring with a formed latch feature. A cam on the motor pushed on a brass pin, in turn pushing the spring to release the catch. For a single prototype this worked very well, but when more than one was needed several problems became apparent; the most challenging being the difficulty of forming the integrated spring and latch. The hardened and tempered spring steel worked great for one unit but the cost and complexity of developing more than one was considerable. 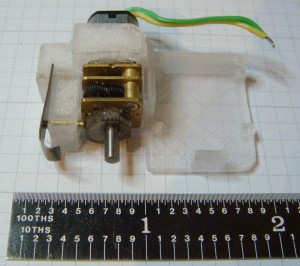 On a whim I started looking at using T-Glase as a spring. I had noticed that when printed in thin, solid sections the material was flexible without breaking. A few trials later I had what would become the final prototype design. The latch, spring, and cam follower were integrated into a single 3D printable part. 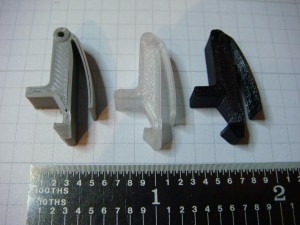 The cam follower pin became a pivot pin and the Pololu motor was replaced with a smaller, cheaper planetary gearhead unit with lower current draw. The motor came with a 6-point spline interface, so a cam head was designed and printed to slip over the existing interface unit. The cam head provided another challenge; the first set of prints were made with PrintedSolid PET+ and have not been repeatable. The PET+ material provides many of the properties of ColorFabb XT but with a more rubbery, flexible characteristic. It was chosen only because it was what was in the printer at the time. Subsequent attempts with T-Glase and XT have failed to print without voids due to the thin areas on the part, or have not been able to hold the tolerances required to mate with the motor interface, requiring extensive hand finishing. In production, this will be an injection molded part; for now it isn’t a problem as I printed more than enough to cover the needs of the project. 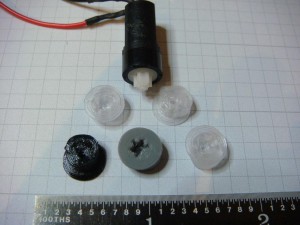 Extensive testing with this design showed the longevity of the spring – over 20,000 latching cycles were recorded without a failure of the spring and with only a slight loss in stiffness. The first spring was printed with clear T-Glase and after about 12,000 cycles fine cracks were visible at the root of the leaf spring arm. Subsequent parts were made from black XT and show no such cracking. This may also be due to a slight lengthening of the leaf spring arm as well. The gray PET+ did not have enough stiffness to properly latch. 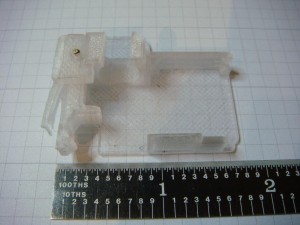 The success of the design encouraged me to look further into replacing torsion and compression springs with 3D printed leaf-style springs. The same company came to me with another project; they wanted to use the same technology to make a firearm trigger lock. The idea was to allow the user to bypass the key lock with a control system using Bluetooth Low Energy (BLE), enabling the lock to be triggered between the locked and unlocked states based on proximity or a command signal from the user’s smartphone. As with the previous product, only a small volume was available. My customer wanted to modify an off-the-shelf lock and just integrate the BLE system while keeping the keyed operation so the user could choose between unlocking methods. The trigger lock presented a larger challenge as the force required to keep the lock dependably closed is relatively large – on the order of 4-5 lbf. In the key-only design this was accomplished with a compression spring. Due to the force limitation of the motor, a smaller force had to be used for prototyping with the assumption that the design would be changed to ensure proper retention of the lock. The prototype for this product involved replacing much of the volume occupied by the compression spring with the controller board and adding additional volume by extending the height of the unit. To fit the space and to provide optimal use of the available motor force, the linear spring and latch was replaced with a pivoting latch and an inward-curved leaf spring, as opposed to the outward curve used on the previous design. The inward curve provided a large increase in force, matching or exceeding that of the compression spring, in about the same space as the compression spring. This was too much for the motor to handle, so the force was reduced by changing the radius of the spring curve
and the amount of deflection. Several trials were made until a balance between the available force from the motor equaled the force required to keep the lock latched during product development and initial user testing. 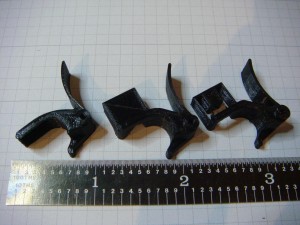 A similar curved spring was used on a subsequent project. This third project was to develop a cabinet lock. The lock mechanism required the use of a serrated rod mounted to the cabinet door that interfaced with a spring-loaded locking unit mounted on the cabinet frame. When the door was closed, the rod slid into the locking unit and an internal latch caught one of the serrations on the probe. The desired size of the latching unit was cuboid and 1.25 inches on a side. As with the previous two projects, the restricted volume prompted the use of a small stroke spring. By integrating the spring into the latch slider, the part count was reduced and the assembly of this complex mechanism was simplified. 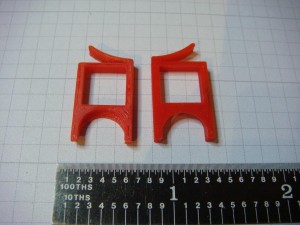 The key to utilizing 3D printed springs in production prototypes is to maintain the design to allow the printed spring to be replaced with a metallic spring with a minimum of redesign once the unit goes to production. Some products may be able to maintain the use of a plastic spring when the parts are being injection molded, but it will depend on the material used and the expected life of the part. For prototyping, 3D printed springs can enable rapid manufacturing of customized spring units and can integrate what may have been several separate and sometimes tiny parts into a single larger part. The technique can enable rapid testing and trials to enable the proper operational force to be determined; data that can be used later in the development cycle to properly size replacement metallic springs.
For more information on the products described here, please visit www.smartarmortech.com

Ben Hudson is a designer and engineer running his own business in the Southwest US state Arizona. Ben runs several Robox units as a prototyping service and was involved in early Robox beta testing.